Home › Revenue Management Spa › A Spa With Just One Guest: You and Yourself

A Spa With Just One Guest: You and Yourself

Spas, even the most glamorous ones, can elicit their share of cringe-inducing moments. There’s the awkward scene in the locker room. The forced “relaxation room” time with other robe-clad clients—some who want to party, others who want to sleep. Not to mention sauna etiquette conundrums (towel or no towel?).

Now, hotel companies are designing spas to give privacy-craving guests a spa of their own. These mini “spas within a spa” include their own bathrooms, showers, lounging areas and even Jacuzzis and steam rooms. People can pay to spend the day getting treatments and hanging out in a bubble of spa-suite seclusion.

“We can guarantee people don’t have to wear clothes there and they should feel very comfortable,” says Martein VanWagenberg, managing director of Las Ventanas al Paraíso, a Rosewood Resort in San José del Cabo in Mexico, of the four spa suites the resort opened in 2011. The private spaces—each with its own outdoor shower and Jacuzzi bathtub—are occupied 65% of the time, compared with 50% for the regular treatment rooms. 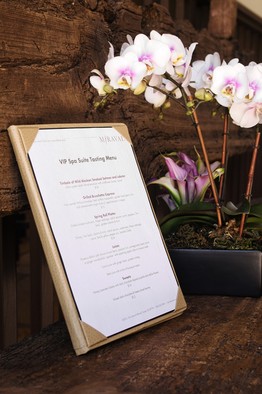 Mark Peterman for The Wall Street JournalGuests at Miraval’s VIP spa suite can order from a special chef’s tasting menu.

The spa suites are marketed to couples who want to spend time together after a massage. In most spas, men and women have to split up before and after their appointments to head to separate locker rooms, saunas and hot tubs. And as spas increasingly become popular for bachelorette parties and bridal showers, spa suites allow resorts to balance the desires of guests who want to sip champagne and chat with those who want peace and quiet.

Some spas say they can charge a premium for their spa suites. And the tricked-out spaces can give spas an air of luxury and exclusivity.

“Our guests are really into privacy,” said MaryAnne DeMatteo, director of sales and marketing for Jumby Bay, a Rosewood Resort in Antigua in the Caribbean, which opened an all-suite spa in 2010. “We didn’t want them to be in locker rooms, bottom line.” The resort’s five spa suites include private bathrooms, showers and terraces with views of the sea, complete with dining tables for a post-massage lunch. 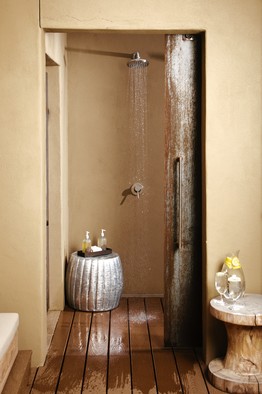 This style of spa has been popular in Asia for a while, but is now expanding to other parts of the world. Marriott International Inc.’s MAR +1.25%JW Marriott has long had spa suites at its hotels in Asia and the Middle East. In the last two years, it has added the spaces to spas in Hawaii and Grand Rapids, Mich. Marriott’s Ritz-Carlton brand recently incorporated spa suites into properties in Lake Tahoe, Calif., Palm Beach, Fla., Amelia Island, Fla., Denver and near Tucson, Ariz. Four Seasons Hotels and Resorts now has spa suites in about 60% of its hotels and it is including them in all new properties, says Simon Casson, chairman of the company’s Spa Task Force.

When Susan Lewis visited a Manhattan day spa, she was all set for a deep-tissue massage and some “quiet and relaxation,” says the 42-year-old film producer in New York. “Then you get there and there’s a bachelorette party going on.” Not only did the chatty guests intrude on her serenity in the lounge and hot tub, she says, but “you end up feeling like you’re in high school. Everyone is partying and you’re the lonely kid in the corner who is not invited.”

Group spa parties are a growing business at many resorts. And spa suites can be used to separate them from tranquillity seekers. Carmel Valley Ranch, a 139-room resort in Carmel, Calif., recently launched two new packages to attract wedding groups to its three spa suites. In the $775 “Hot Husband Package,” six guys receive a “classic barber shave” accompanied by Bloody Marys. 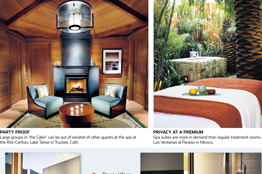 The suites are also appealing to celebrities, spas say. Before Miraval Resort and Spa in Tucson, Ariz., built its VIP spa suite in May of 2012, some guests would “hang out and wait to see” celebrities, says Michael Tompkins, chief executive of Miraval Resorts.

“We were concerned about cameras in the spa,” even though they’re forbidden, he says. Now, famous faces can sneak into the 1,000 square-foot suite via a private back entrance. The space also has two massage tables, a fireplace, outdoor Jacuzzi and shower. Guests are welcomed with a glass of champagne and snacks. (For anyone who wants to linger in the space before or after treatments, it is $100 for 20 minutes; $2,500 for an entire day.)

Bill Rancic, the television host and reality show star, has visited Miraval about 10 times. Most recently, he and his wife Giuliana, an anchor of E! News, frequented the VIP spa suite while she was preparing for and then recovering from breast cancer surgery. “It was completely private. We just hung out there and chilled out,” Mr. Rancic said. 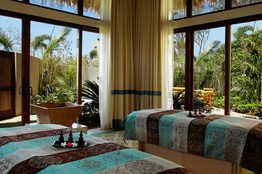 Spas often try to entice customers to the private spaces by offering special—and pricey—treatments that are only available in the suites. The Homestead in Hot Springs, Va., for example, is opening a new Canyon Ranch SpaClub with 28 treatment rooms in June 2013. Two of the spa’s treatments are only available in its new “Ritual Suite,” which features a private lounging area.

“We think there will be a fairly strong appeal to those political families and couples who may want a little extra privacy when going to the spa,” says Arthur Berg, vice president of marketing at KSL Resorts, which manages the Homestead. He calls the suite “the next, new frontier.”

Spas often charge a premium for private space. A half day in the “Grand Palace Suite” (with fireplace and flat-screen TV) at the Montelucia Resort & Spa in Scottsdale, Ariz., will run guests $499—not including treatments.

In China, the new Four Seasons Pudong in Shanghai has two spa suites (with heated floors, an infinity-edged soaking bathtub, sauna and steam room). The “ultimate spa treatment” for two, which is available only in the suites, includes facials and four-handed massages for two (two therapists work on each person) plus champagne and caviar. The price tag for the three hours: $2,100 per couple. More than 10 couples have booked it since the spa opened in November.

At Mukul, a new resort in Rivas, Nicaragua, each of the six free-standing spa casitas has distinctive features, décor and treatments. The “Rain Forest” room, for example, has a saltwater plunge pool. The goal is to “try to attract our guest to come and visit the spa every day,” says Angel Stewart, the resort’s spa consultant.

Some properties are going so far as to bring the spa into the guest room. Las Ventanas has three abodes with private spa treatment rooms with massage tables and steam rooms.

The Grand Del Mar near San Diego, Calif., is planning to add souped-up showers, bathtubs and hidden massage tables to between seven and 10 of its 249 rooms. The accommodations, located adjacent to the resort’s spa, will also get healthier minibar snacks and room-service menu items, says Tom Voss, the resort’s president. And after a treatment, you’ll be able to go “straight to your bed and take a nap,” he says.

Andrea Petersen writes about health and travel for the Personal Journal section of the Wall Street Journal.

Previously, Ms. Petersen was an editor