Can GOP PAR be an alternative to widely used REV PAR for hotel performance? Advantages and disadvantages Analysis. 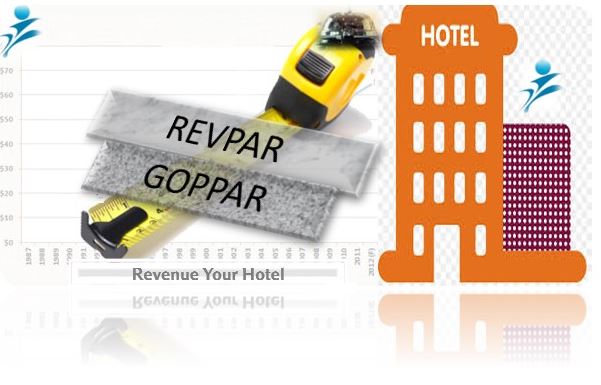 Long-time ago for hotel industry performance analysis, there are two simple traditional indicators were used: ADR (average room rate) and the percentage of occupancy. Then with the progress of yield/revenue, management RevPAR (revenue per available room) started to be the main indicator, because it reflected how efficient the hotelier could manage occupancy and price at the same time, depending on demand.

RevPAR has historically been the most widely used metric for benchmarking performance in the hospitality industry. Its success as a key performance indicator or KPI is the result of its efficiency and simplicity. RevPAR is efficient because it combines the results of both occupancy and average rate into one number. In addition, it is simple, because all you need to calculate it is occupancy and average rate.

GOPPAR (Gross Operating Profit per Available Room) show as a result of the revenue management evolve during the last decade, It gives greater insight into the actual performance of a hotel than the most commonly used RevPAR as it not only considers revenues generated but also factors in operational costs related to such revenues.

GOPPAR is the total revenue of the hotel fewer expenses incurred earning that revenue, divided by the available rooms. GOPPAR does not take into consideration the revenue mix of the hotel, so while it does not allow an accurate evaluation of the room revenue generated it demonstrates the profitability and value of the property as a whole.

In 2002-2003, GOPPAR was offered to use as additional KPI which meets requirements more complete and not only for revenue managers, but also for investors, developers and owners of the hotel real estate, because now it includes the system of indicators GOP PAR (Gross Operating Profit per Available Room) and Trev PAR (Total Revenue per Available Room).

Let us clarify, what additional information can be gained from the GOPPAR indicator as a new KPI? Can GOP PAR be an alternative to widely used REV PAR? What are their advantages and disadvantages? What are the changes in the hospitality industry analysis?

Although GOPPAR provides a clearer picture of efficiency, profitability, and the bottom line, which cannot be derived from RevPAR, but some hoteliers decided not to stop in reasoning and developing theory and tried GOPPAR However, nowadays the majority of revenue managers and hotel management still use REV PAR as a main indicator to analyze their progress. Nevertheless, what is the limitation of this type of analysis?

Let’s have a look at Rev PAR formula:

The hotel industry has been using RevPAR as the standard performance measure. It is defined as room revenue divided by the number of rooms available during a period of time or the multiplication of paid occupancy percentage by the average daily rate. Its emphasis on the rooms division of a hotel as the primary revenue source makes the measure relevant to all types of hotels. This is why a leading lodging consulting and data company such as STR Inc. (Smith Travel Research) provides RevPAR data as its primary property-level performance indicator. All major publicly traded hotel corporations, such as Marriott and Hilton, also report their RevPAR along with other widely used performance indicators (e.g., Diluted Earnings per Share (EPS) and adjusted Earnings Before Interest, Taxes, Depreciation and Amortization (EBITDA)) in their earnings announcements.

However, we look into the RevPAR formula, it looks Simple and straightforwardness calculation, but looking deeply on RevPAR analysis can show the below:

1- REVPAR is not necessarily a profitable measurement. REV PAR does not reflect mutual influence between Room’s department and F&B. Consider two different hotels with the same room’s number and the same REV PAR, for example, 100 US$. Say, the first hotel shows a 50% occupancy level with ADR 200 US$, the second hotel is occupied for 80% and ADR 125 US$. However, it is necessary to take into consideration that in the second hotel the total revenue will be higher since it has a higher occupancy level, and most likely, will increase incomes from additional services (F&B, phone, other services). That mean RevPAR does not measure a hotel’s ability to generate revenue from another department, however, and naturally, variable expenses will increase together with increased turnover. It is obvious, that GOP PAR will be different in two, apparently, “identical” hotels.

2- REVPAR does not take into account the no-show status of booking, early departures and penalties for cancellations, as it varies from hotel to other. Some hoteliers consider a share of such incomes at REV PAR calculation, others hoteliers classify these incomes as «other incomes», others hoteliers consider them at the calculation of the total room’s profit, but do not consider at the calculation of average rates. All this complicates the comparison between hotels. Certainly, supervision for REV PAR levels of one hotel in time under the condition of stable indicators allows following up its changes and growth of its market share.

3-  REVPAR does not consider the cost of the sale of room (i.e. cost of the intermediary channel – commission fee, payments to GDS). Actually, room sold for 100? through the channel with 20 % commission will effect on REV PAR positively while room sold directly to the client for 90? Is it more profitable for a hotel? Therefore, at the big share of sales through intermediaries REV PAR of the hotel can be up to standard, but profitability not at all.

More and above there is another few reasons saying that RevPAR is not the sufficient i.e. RevPAR is not a measure of financial performance so it has nothing today with profit and loss, so we can consider that REV PAR is just a step of hotel performance evaluation, and in order to get rid of this defect in REV PAR indicator, some revenue management experts, suggest using net REV PAR:

Let’s have a look at GOPPAR formula:

If you look carefully at the formula, it takes all factors into consideration – not only income but also expenses.

GOPPAR analysis considers also growth of variable expenses at increase of the turnover (for room these expenses are for housekeeping, linen washing, the electric power, etc.), and the additional income is taken from a room’s sale (F&B incomes, laundry, telephone, and others), together with cost of OTA’s or GDS channels. For example, if there was a decision was taken to increase commission fee for a certain OTA, GOPPAR indicator will reflect it at once, but not REVPAR. Also is will be taken into account if the hotel goes on essential discounts for corporate clients who increase sales in F&B services and in addition take the conference areas.

GOPPAR is one of the tools, which help to compare concrete hotels to the general market indicator, to make a comparison based on regions, on brands, as well as to compare index with a budgeting indicator.

GOPPAR reflects very well the results of a decrease in costs and how expenses are controlled in a long time period, in particular, after the improvement of market conditions.

GOPPAR takes into consideration all incomes of the hotel and this allows comparing large and small hotels, hotels with various share and volume of a profit from the F&B department and additional services.

What relationship is between GOP PAR and REV PAR?

Let’s review once again hotel departments under the contribution in GOP (the centers of incomes and expenses are traditionally allocated):

The income center: The Room’s fund has the least operational expenses; hence, the sale of the room is the most profitable and brings a higher contribution to the general operational profit.

The profit center: The F&B department has a big share of costs in the profit structure; therefore, the share of its profit in the general operational profit will be less in comparison with the room’s fund.

The expenses center: for example, the engineering department gives only costs and does not generate the income at all.

Every center brings the contribution to the formation of total operational profit. In addition, as for hotel, the Room’s fund will be always the core of generating the profit, hence REV PAR will remain important and basic.

REV PAR increase will remain the main objective for revenue managers on profit management; its dynamics will reflect the result of their work, their ability to react adequately to changes of demand adhering to the main objective - profitability increase.

GOP PAR will be more interesting to investors, proprietors and general managers of hotels as a reliable indicator, which reflects the ability of the hotel to generate monetary streams.

One more difference between REV PAR and GOP PAR consists of the time period. Occupancy and the average rate are counted up daily, and also monthly and annually. Thus, REV PAR remains an indicator, which operatively, daily, measures a hotel profile in the market, reflects its interaction with the market, it’s market share, becomes a base for comparison with competitors and with the general market indicators. The total operational profit is usually traced monthly, quarterly and annually; accordingly time periods are the same for which it is possible to receive GOP PAR.

Ahmed Mahmoud has more than 15 years experience in hospitality industry and business administration, Ahmed began his career early by holding a variety of management positions with such top hotel chains as Accor Hotels, Hyatt International