The Impact of AirBnb on Hotels and Hospitality Industry

The emergence of multi-sided technology platforms, collectively known as the “sharing economy”, has enabled individuals to collaboratively make use of under-utilized inventory via fee-based sharing. Consumers have so far enthusiastically adopted the services offered by firms such as Airbnb, Uber, Lyft and TaskRabbit. The rapid growth of peer-to-peer platforms has been aided by their ability to scale supply in a near frictionless manner as well as the rich selection of goods and services they have on offer. As an example, Airbnb, a provider of travel accommodation and a pioneer of the sharing economy, has served over 30 million guests since it was founded in 2008. Although Airbnb remains privately held, its valuation of over $10 billion now exceeds that of well-established global hotel chains like Hyatt. Yet incumbent firms, despite both facing higher marginal costs and offering less personalized products than peer-to-peer platforms, have mostly downplayed competition from platforms like Airbnb 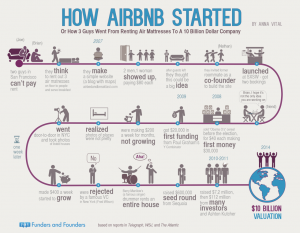 Airbnb itself was founded in August 2008 and defines itself as “a social website that connects people who have space to share with those who are looking for a place to stay”, and exemplifies a community marketplace. Airbnb hosts list their spare rooms or apartments, establish their own nightly, weekly or monthly price, and offer accommodation to Airbnb guests. Airbnb derives revenue from both guests and hosts for this service. They charge guests a 9 − 12% service fee every time a reservation is booked, depending on the length of the reservation, and they charge hosts a 3% service fee to cover the cost of processing payments. Airbnb’s business model currently operates with minimal regulatory controls in most locations, and as a result, hosts and guests both have incentives to use signaling mechanisms to build trust and maximize the likelihood of a successful booking. To reinforce this behavior, Airbnb has built an online reputation system that enables and encourages each guest and host to leave a review upon completion of a stay. Guests use star ratings to rate features of their stay, e.g., cleanliness, location, and communication, while both guests and hosts may provide other information about aspects of the stay, including personal comments. Since its launch in 2008, the Airbnb online marketplace has experienced very rapid growth, with more than seven to eight  million guests and over three   million nights of cumulative bookings worldwide at the end of 2015. The site is now being used by over 50,000 renters per night and had a market cap of $2.5 billion after its most recent funding round

AirBnb has quickly become a threat to hotels as travelers choose to book with independent hosts on the website rather than with traditional hotels. While every hotelier is aware of the threat and stiff competition that is Airbnb, do you know the quantifiable impact the vacation rental site actually has on the industry as a whole? Recently, the Hotel Association commissioned a report by HVS Consulting & Valuation on the financial effect of Airbnb on the hotel industry. The report focused on the effects of Airbnb in New York City, so results may vary in different areas, but it gives strong indication about what is happening and the impact is great on the hotel industry not only in NY city, but it widely spreading allover USA city and other countries outside the USA territory.

The Estimated lost Revenue and Impacts

HVS estimated that hotels lose approximately $450 million in direct revenues per year to AirBnb. Between September 2014 and August 2015, 480,000 hotel room nights were reserved while over 2.8 million room nights were booked on Airbnb. By 2018, HVS estimates that Airbnb room nights will reach 5 million per year. Clearly, the vacation rental site has diminished the demand for traditional hotel rooms. Additionally, many hotel employees are losing their jobs because of these decreasing demands. Airbnbs are less labor intensive than hotels because they do not require the same level of service. Over 2,800 jobs are directly lost to Airbnb, a loss of over $200 million in income for hotel employees.

With lesser demand for hotel rooms comes an additional negative effect for hotels and their employees. When guests choose not to stay in a hotel, the money they would have spent on food and beverages at the hotel’s restaurant and bar is likely spent elsewhere. Therefore, the hotel loses out on the revenue they otherwise would have received from that guest. In total, over $108 million of food and beverage revenues ($88 million on food and $20 million for beverages) are lost because travelers choose to book with Airbnb.

The issue is not in food and beverage lost only, when looking one more time about the other services and ancillary revenue which can be utilized by the guest while staying at a hotel, i.e. SPA, Business center, late check out, early check in, last minute cancellation fees, no show fees, luggage portal fees, all those services and many other are also likely spent elsewhere or saved by not spending because the host would not offer such services, needless to calculate the lost revenue.

The other impact comes when those guest choose not stay in hotel, so they lose the loyalty benefits they get if they stay in chain hotel i.e. SPG for Starwood, but in the other hand hotel chains losing a loyal customers to AirBnb, so potentially hotel chains to lose customers and Airbnb might think to have its own loyal program in the near future.

Trying to say that each additional 10% increase in the size of the Airbnb market resulted in a 2-3 % decrease in hotel revenue.

Lastly and since Airbnb base locate in the USA, Airbnb rentals fall under different laws and tax regulations than hotels , i.e. In New York City, the loss in hotel room nights costs local, state and federal governments $226 million in lost tax revenues per year. The total effect of Airbnb on the hotel industry and the government in NYC is about $2.1 billion annually. As Airbnb continues to grow at a rapid rate, these losses will only increase.

Another report by CBRE Hotels compiled select information for hundreds of U.S. markets to assess the relevancy of this sharing platform to the traditional hotel industry. From this data, the firm has developed an Airbnb Competition Index. This measure incorporates a comparison of Airbnb’s Average Daily Room rates (ADR) to traditional hotel ADR’s; the scale of the active Airbnb inventory in a market to the supply of traditional hotels, and the overall growth of active Airbnb supply in that market, into a measure of potential competition. New York was identified as the number one domestic market at risk from the growth of Airbnb, with an Airbnb Competition Index of 81.4, followed by San Francisco, Miami, Oakland and Oahu.

As far as hotel managers are concerned, the competition their hotels  face from peer-to-peer platforms has several unique features that differentiate it from competition with other hotels . First, the Airbnb platform has near zero marginal cost, in that a new room can be incrementally added to (or removed from) the platform with negligible overhead. Because of this, Airbnb can scale supply in a near frictionless manner to meet demand, even on short timescales. By contrast, increasing hotel room supply involves buildout, causing significant marginal costs for hotel chains. Second, Airbnb offers a much wider range of products and services than hotels: Airbnb users can rent anything from an apartment to a yurt. More importantly, because Airbnb leverages existing housing inventory, it can potentially expand supply wherever houses and apartment buildings already exist. This is in contrast to hotels, which must be built at locations in accordance with local zoning requirements. Therefore, competition by Airbnb is potentially harder for incumbents to adapt to, compared to competition by other hotel firms.

Turning to consumers, we show that hotels in areas where Airbnb has an established presence have responded to increased competition by lowering their prices, which harms their revenue, but benefits travelers, even those who do not use Airbnb. In addition to reduced prices, consumers also benefit from increased variety provided through peer-to-peer platforms. Furthermore, consumers on the supply side benefit through additional income generated by providing goods and services via peer-to-peer platforms.